Thrissur is not only considered the cultural capital of the state, it is also termed the gold capital. With India’s largest jewelers having started from Thrissur, it is the perfect hub for all those who wish to purchase gold jewelery. The gold market in Kerala is also a huge source of revenue for the government and it has catapulted local entrepreneurs to the positions of  wealthy businessmen in the country. Over 30% gold ornaments sold in India is crafted by the talented artisans of Thrissur. Thrissur has about 700 jewellery outlets, which source products from over 3,000 manufacturing units located in suburb such as Venginissery, Chiyyaram, Koorkkanchery, Vallachira, and Perinchery.  India’s largest gold retailers like Kalyan Jewellers, Avatar, Alukkas (Joy, Francis and Jos), Chemmanur and Lulu Gold are headquartered in Thrissur. When one visits the city it is hard not to notice the numerous hoardings and billboards that advertise Gold ornaments, you find both old names and new upcoming jewelers. 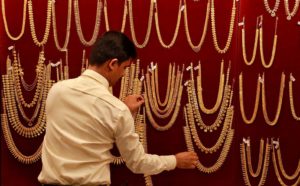 The Story behind the Gold

King Sakthan Thampuran was instrumental in bringing the many successful entrepreneurs of now to the city. He invited Syrian Christian families that were famous for their business skills to set up their trades in Thrissur. Among many other forms of trade, gold trade was one of the most common type business set up. With time, these industries have developed and expanded but gold is seen to dominate them all. The fast growing love for gold in the state and country led to it blossoming. Many of the gold jewelers in the city trace their roots to families that arrived on Sakthan Thampuran’s invitation.

What boosted the gold supply were the 3 policies that were implemented during the time. The first being the repeal of the Gold Control Act (restricting the sale and holding of gold in personal possession). The second was the grant of permission to non-resident Indians to bring up to 5kg (subsequently raised to 10kg) of gold and the third was the introduction of provisions in the Foreign Exchange Regulation Act, 1973. Sensing these changes and the profit behind the gold business, many families got into the field of the gold trade. There are now not only Syrian Christians though; Hindus and Muslims also have a share in the booming gold industry.

Joy Alukkas which originated from Thrissur is one of the most renowned gold retailers in the country. They came in to being when the Alukkas brothers went separate ways with the family gold business. Joy, Jos and Francis have individually accomplished empires in the gold business.  In 2018, Forbes Middle East ranked Joy Alukkas among the Top Indian Leaders in the region. Chiriyankandath Jewellery is yet another renowned manufacturer in India which is based in Thrissur. Bobby  Chemmanur’s Chemmanur Jewelers and T.S Kalyanaraman’s Kalyan Jewellers are other big names in the business, compared to these Thottan Jewelers is an old name, having started in the 19th century, it tags itself ‘proudly old fashioned’. Chungath jewelers also began their business from Thrissur, other jewelers such as Josco and Bhima have beautiful and extravagant showrooms in the city.

The gold business is continuously growing and the retailers come up with new innovations and ideas every now and then. The demand is seen to remain the same in the State leading to all these big businesses earning more and more everyday. The love for gold in the State remains intact and these businesses spend millions on advertising and boosting their brand.